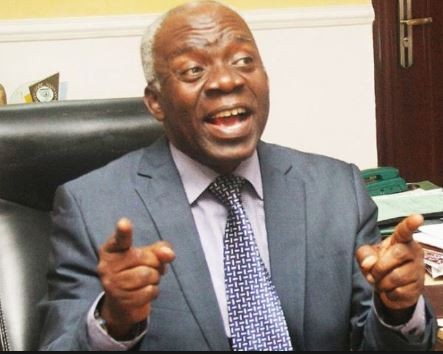 Falana noted that “There has been a massive and accelerated transfer of much of the wealth from the developing world into developed economies around the world, much of which was looted from various treasuries across Africa and in the rest of the developing world”.

He stated this today in a paper titled Human Rights Issues Surrounding The Non-Return Of Assets To Countries Of Origin and delivered last week at the Second Forum of the Anti-Corruption Situation Room, organised by the Human and Environmental Development Agenda (HEDA).

“African governments and anti-corruption bodies should stop labelling Africa as a continent of corrupt people. London is the centre of global corruption. The banks of western countries receive and keep stolen wealth from Africa and other developing countries. Western governments conveniently hid behind the free movement of capital ideology to fold their arms and turn the other way for many years after the end of the Cold War. This laissez-faire attitude on the part Western leaders encouraged corrupt leaders from Africa to use stolen wealth from their various countries to establish an individual presence in their economies; buying shares in major corporations, mansions and other landed properties, yachts, planes, you name it.

Mr David Cameron whose family name was listed in the Panama papers had the temerity to label Nigeria as a fantastically corrupt country. The Abacha loot of about $5 billion has been traced to banks in Switzerland, United Kingdom, United States and other western countries. Apart from Switzerland which has reluctantly returned part of the loot no other recipient country has recovered and repatriated a dime to Nigeria. Since the Joseph Kabila regime has failed to request for the repatriation of the over $10 billion kept in Zurich banks by the late Mobutu Sese Seko, the Swiss government is planning to return the looted wealth to the family of the former dictator and not to the people of the Democratic Republic of the Congo.

Throughout the 1970s and much of the 1980s, money leaving Africa into Europe and other parts of the world took an upward trajectory, leaving essential services to rot and decay. What then followed was a serious economic crisis across Africa, which witnessed the International Monetary Fund (IMF) setting up offices inside the various ministries of finance in state after state on the continent, as it tried to help implement a harsh austerity programme to “re-adjust” the various economies. Nigeria has lost billions to illicit financial outflow resulting from corruption and embezzlement of funds by public officials. Nigeria’s history as a “fantastically corrupt” country is apparent upon an appraisal of the activities of its past leaders and public officials especially as it relates to the conversion of government fund.

Meanwhile, scores of African “migrants” were finding their ways into Europe, looking for employment and a better life. This alarmed Western governments whose citizens began to make their feelings known by voting in right-wing governments promising to put a stop to immigration from so-called “Third World” countries. The idea of untrammelled, free movement of capital economic orthodoxy has long been dead and buried. Western Governments, especially the USA, now freely impose sanctions against countries, for instance, Iran and Russia, even against specific individuals and companies in those countries and elsewhere in the world. Why then have corrupt political leaders in Africa and their stolen wealth not attracted the same level of vigour and scrutiny? It is simply that corrupt money emanating from Africa and elsewhere had long been thought of as a ‘victimless’ crime.

There is, after all, no one visibly hurt, no building being blown up, no planes flying into high rise buildings or anything of that nature. It was seen as just another typical “Third World” malaise. Well, not any more. There is a nexus between stolen wealth and human rights. It is the intersection between poverty and international (human rights) principles. Stolen wealth is not an abstract idea dangling in the air; it fosters poverty, diseases and illiteracy, ill-health and general social deprivations. It also subverts good governance and the rule of law of the country from which the wealth has been stolen. Every single one of the index of underdevelopment mentioned above is interwoven with the holding of stolen wealth and it is inimical to basic human rights and decency. I fully concur with Dr Kolawole Olaniyan who has said that grand corruption breeds bad governance, instability, and creates opportunities for criminal entrepreneurs to thrive, as politicians and their friends tend to take advantage of weak law enforcement and gaps within the criminal justice systems to use public offices for private gain. But unless the people are made the centre of development there will always be enough funds to steal and transfer abroad or keep locally by unpatriotic public officers. Multinational corporations and politically exposed persons from western countries enjoy almost absolute immunity in many African states. While Africans are prosecuted for engaging in corrupt practices their foreign accomplices who are treated like sacred cows due to political pressure from their home governments.

Notwithstanding that the Buhari administration has demonstrated some political will to fight corruption it has not been able to order an investigation into serious allegations of corruption involving multinational corporations and other western companies. For instance, the petition to the government alleging theft of crude oil worth over $200 billion by indicted oil and shipping companies has been ignored. Even instead of directing the EFCC to recover the huge fund, the federal government has continued to take multi-billion-dollar loans from China and African Development Bank. Whereas the officials of Halliburton involved in bribing Nigerian government officials with $180 million to secure a contract were prosecuted by the United States government the EFCC was pressurised to drop the charges against, Mr Dick Chiney, a former Vice President who was the managing director of the company at the material time. No doubt, recovery and return of stolen assets stashed in Western economies and transparent and accountable management and use of returned funds would help strengthen the ability of victim countries to fortify the rule of law, improve access to justice (and consequently, enjoyment of human rights) and reduce state impunity. It will also serve as a measure of accountability, with huge potential to reduce impunity thereby impacting on respect for human rights including socio-economic rights in African countries. Since public officers are prohibited from keeping and maintaining foreign accounts, civil actions should be filed against public officers whose foreign accounts have been identified and located.

Anti-graft agencies should speed up the trial of politically exposed persons whose assets have been traced to foreign countries. Once the cases are concluded and forfeiture orders are made by trial courts the judgements should be registered abroad and enforced. The governments of victim countries should institute civil proceedings in countries where the nation’s stolen wealth has been located. The EFCC in Nigeria has secured some orders of Mareva injunctions against the assets of some Nigerian citizens and companies which are said to proceed with economic and financial crimes. Foreign banks that have aided public officers to launder stolen money should be reported to the relevant financial regulatory and anti-corruption bodies. Western governments should be requested to impose the visa ban on public officers who have engaged in corruption and money laundering.

Reports of investigation of the allegations of such practices should be made available to the embassies. For the credibility of the request, the reports should include the names of serving public officers who have been indicted. Western countries should deny visas to any public officer travelling for medical treatment abroad. African countries should lead a campaign for the classification of grand corruption as a crime against humanity which should be tried by the International Criminal Court. Loopholes in the financial system should be blocked to prevent capital flight and money laundering. Banks and other financial institutions aiding money laundering should be sanctioned and made to pay aggravated and exemplary reparation. They may also be sued in the countries where the offences may have been committed.”