Shares in European carmakers took a hit on Friday, after US President Donald Trump redoubled his threats of tariffs against their cars.

Mr Trump tweeted that the US would place a 20% import tax on European cars, if the EU’s “tariffs and barriers are not broken down soon and removed”.

Shares in BMW, Daimler, Porsche and Volkswagen each dropped more than 1%, before regaining ground.

Mr Trump’s comment came amid a US national security probe of car imports.

Mr Trump launched the investigation last month, ordering the Commerce Department to determine if car imports are a risk to national security.

The US followed a similar process for the steel and aluminium industry, which led it to impose tariffs on the foreign metals this spring.

The EU, China, Mexico, Canada and India are among the places that have plans to retaliate or have already done so. 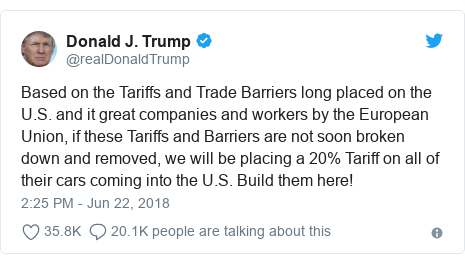 The decision to expand the Trump administration’s trade disputes to foreign car manufacturers has come under fire from some in the US Congress, as well as many business lobby groups.

At a hearing this week, Senator Orrin Hatch, a Republican from Utah, said he was “stunned” that the Trump administration was investigating the national security risk of vehicle imports, which is estimated to affect about $200bn worth of imports.

He said the probe alienates allies and tariffs would lead to job losses and increased costs in the US.

US Commerce Secretary Wilbur Ross assured the congressional panel that there has been “no decision” made about whether to recommend tariffs.

“We’re in the early stages of the process,” he said.

He said Thursday that the Commerce Department hopes to complete the investigation by the end of July or August.

The EU sent almost $50bn in vehicles and auto parts to the US last year, with roughly half coming from Germany.

Cars from the UK accounted for about $9bn, according to the Peterson Institute for International Economics, a Washington think tank.

The organisation estimates that a 25% tariff on foreign vehicles and parts for them, assuming the US does not grant exemptions to some countries, would lead to the loss of about 195,000 jobs in the US.

Shares in major European car companies were already on edge due to trade tensions.

Daimler earlier this week warned that it expects lower sales of Mercedes-Benz cars due to a tax on the import of US vehicles into China.