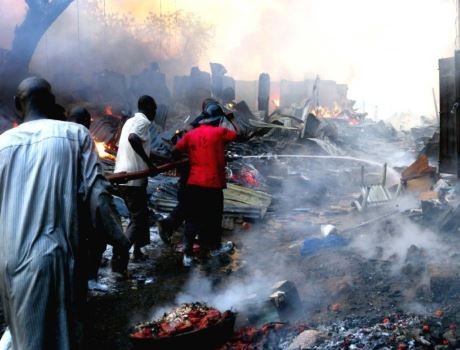 The Director of the State Fire Service, Alhaji Sagir Madaki, revealed in Kano on Saturday that the fire burnt six shops.

He said “we received a distress call from Kofar Wambai Police Division at about 8:57p.m that there was fire outbreak at the market. On receiving the information, we quickly sent some of our personnel and fire fighting vehicle to the scene of the incident at about 9:05p.m to quench the fire.”

Madaki said that with the quick intervention of fire service personnel it took 55 minutes to put it under control so as not to spread to other shops. The director said the cause of the fire was under investigation.

He advised traders at the market and other residents to be more careful and desist from using instruments capable of triggering fire as a way of guarding against future occurence. The director also advised the people to keep fire bucket, fire blanket and fire extinguisher that would enablethem to curtail the spread of fire before calling on the fire service.