INEC confirms that 4,695 smart card readers got burnt in the Anambra State inferno

The Independent National Electoral Commission (INEC) has confirmed that 4,695 Smart Card Readers were destroyed in the fire that occurred in its office in Awka, Anambra on Tuesday.

Festus Okoye, National Commissioner, Chairman of Information and Voter Education Committee, made the confirmation in a statement issued in Awka saying, there was no fatality or injury report but recalled that similar incidents had occurred in the last 12 days following closely behind those of Isiala Ngwa and Qua’an pan Local Governments offices in Abia and Plateau States respectively.

Okoye said that though the incident no doubt was a setback to the commission’s preparation for the smooth conduct of the elections in Anambra, immediate measures had been taken to ameliorate the situation.

He said that the measures were the mopping up of some of the spare card readers from other states to deploy to Anambra for smooth conduct of the general elections come February 16th and March 2nd. The national commissioner said that with the steps taken so far, the commission remained confident that the election in the state would proceed as scheduled. 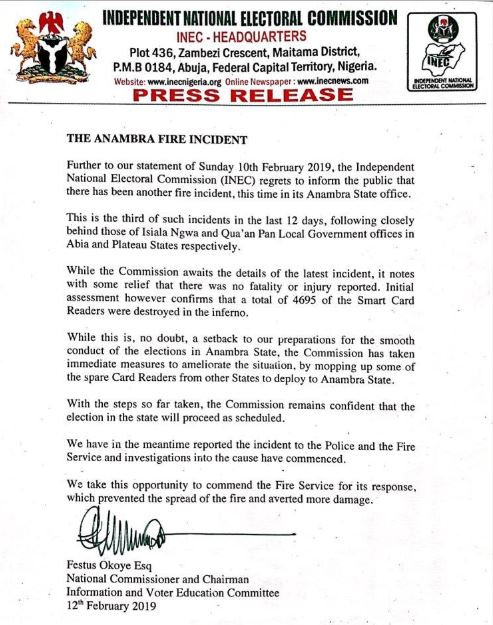