The Ekiti State government has just shut down Our People’s FM 104.1, a private Radio Station in Ado Ekiti.

According to reports, the station was invaded with thugs backed by policemen a few minutes ago, beating staff and forcefully locking up the Station’.

In a statement two days before the station was shut down, Layi Oyawa the Head of Station said, ‘we wish to alert the general public of the sinister plot by the government of Ekiti State to illegally and arbitrarily close down Our People’s FM 104.1, a private radio station in Ado Ekiti. Yesterday, we received an Invoice from the State Signage Agency, demanding for a sum of N175 million as levy for what was termed Promotional Materials. The bill was dated February 11, 2019’.

Today, we also received a letter from the State Board of Internal Revenue, giving us 24 hours to comply with the payment of N175 million “Signage Fee.” We never received any letter from the government other than these two.

From our findings, all these are to provide grounds for the planned close down of the radio station for reasons best known to the government.

For the record, Our People’s FM 104.1 started full operations on January 1, 2019 and as at today, we are yet to erect sign post anywhere in Ekiti state. We have also not done any external advertisement to warrant any Signage Fee.

Also, assuming but not conceding that we made external advertisements, how on earth can a radio station that has operated for less than two months incur N175 million Signage Fee?

It is on record that we have operated professionally since we started operations and this has endeared us to radio listeners in Ekiti and its environ.

We have remained nonpartisan and will so remain so as to sustain the confidence of the public.

We therefore urge that we be left alone to continue to discharge our social responsibilities to the people of Ekiti, in particular and Nigerians in general.

If there are genuine demands as to taxes to be paid to the State Government by our organization, we are ready and willing to dialogue with the government with a view to reaching an amicable resolution. 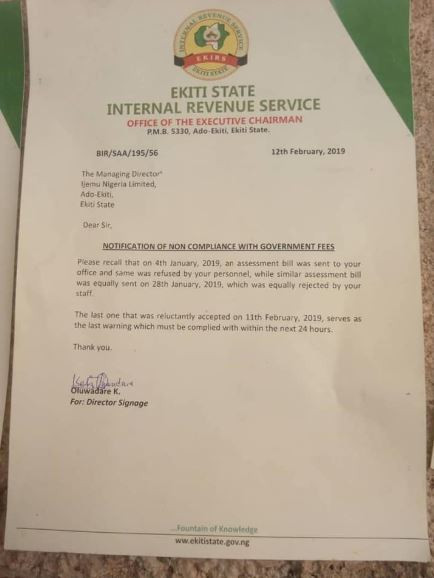 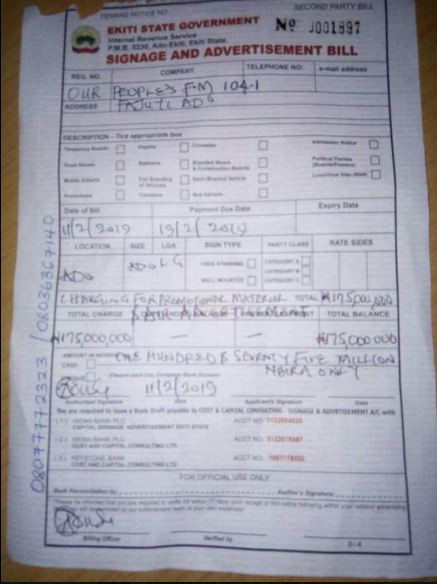