A woman who was raped and battered in her hotel room after front desk gave her room key to a man whose advances she rejected, has been settled by the hotel.

Cheri Marchionda was staying at the Embassy Suites hotel in Des Moines in April 2014 as part of a business trip. While in the hotel’s bar, a man later identified as Christopher LaPointe of New York, approached her. She rejected his advances and later went to bed.

But she woke up to find LaPointe in her hotel room touching her leg. He then battered and sexually assaulted her over several hours.

Police later learned that LaPointe had asked the front desk for a key to Marchionda’s room and they gave him the key without asking him to show proof that he was registered to the room or even a hotel guest.

When he had trouble getting into the room because Marchionda had engaged the door’s safety latch, LaPointe convinced a maintenance worker to disable it, telling the worker he had had a fight with his “girlfriend” and she had locked him out of the room.

Marchionda waved her right to anonymity in hopes of serving as an advocate for hotel safety and sexual assault victims.

Attorneys for Cheri Marchionda say the operators of the Embassy Suites Hotel in Des Moines agreed to a settlement before she was set to testify Wednesday. Terms were not disclosed.

Christopher LaPointe, of New York, is serving a 20-year prison sentence for the 2014 attack.

Below are Twitter users’ reactions to the rape incident. 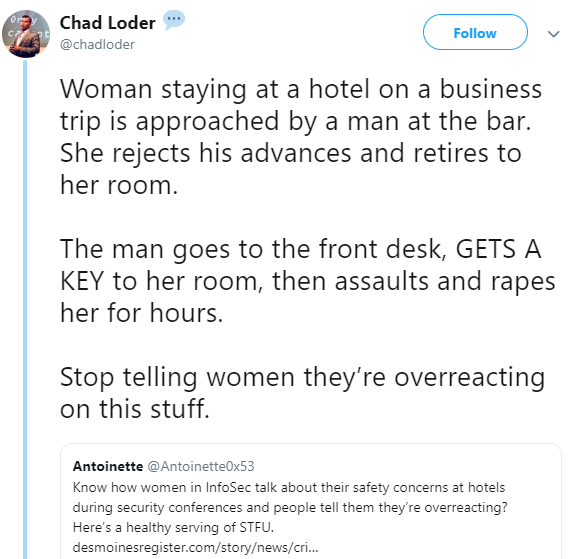