British schoolgirl who joined ISIS with friends is pregnant and wants to return home. See Piers Morgan’s answer to her

A schoolgirl who left Britain in 2015, when she was only 15, to join ISIS has been found heavily pregnant and she wants to return home.

Shamima Begum, a former east London schoolgirl, was tracked down by The Times to a refugee camp in northern Syria. Shamima, now 19 years old, is the wife of an Islamic State fighter. She is nine months pregnant and has had two other infant children who are dead. Her husband is in captivity. 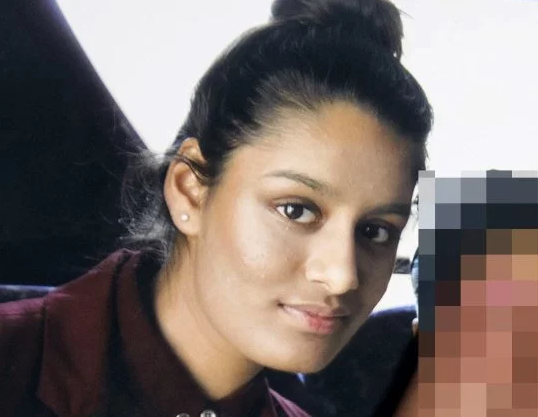 Shamima was one of three schoolgirls – along with Kadiza Sultana and Amira Abase – from Bethnal Green Academy who left their homes in February 2015 to join a fourth Bethnal Green schoolgirl in Syria who had left London the year before. They each married an Isis foreign fighter, according to The Times.

Kadiza Sultana was reported to have been killed in an airstrike on Raqqa in May 2016, while Shamima Begum has recently heard second-hand from other people that Amira Abase, and the other schoolgirl who left Britain in 2014, may still be alive.

When Shamima was tracked down by The Times, she said to them, “I don’t regret coming here.”

However, she added: “I’m not the same silly little 15-year-old schoolgirl who ran away from Bethnal Green four years ago.”

The caliphate is over. There was so much oppression and corruption that I don’t think they deserved victory.

I know what everyone at home thinks of me as I have read all that was written about me online. But I just want to come home to have my child. That’s all I want right now. I’ll do anything required just to be able to come home and live quietly with my child.

But the UK isn’t eager to have Shamima back.

The security minister said he will not put British people’s lives at risk to save people like Shamima Begum who left the UK to join the Islamic state group.

I’m not putting at risk British people’s lives to go and look for terrorists or former terrorists in a failed state.

There’s consular services elsewhere in the region and the strong message this Government has given for many years is that actions have consequences.

Mr Wallace told Sky News it was “worrying” Shamima Begum does not regret her decision to join Isis but added as a British citizen she has a “right to come home” but “actions have consequences”.

Reacting to Shamima’s plea to be allowed to return home for the sake of her unborn child, Piers Morgan shared a screenshot of an article where she asked to be brought home and he replied simply, “No.” 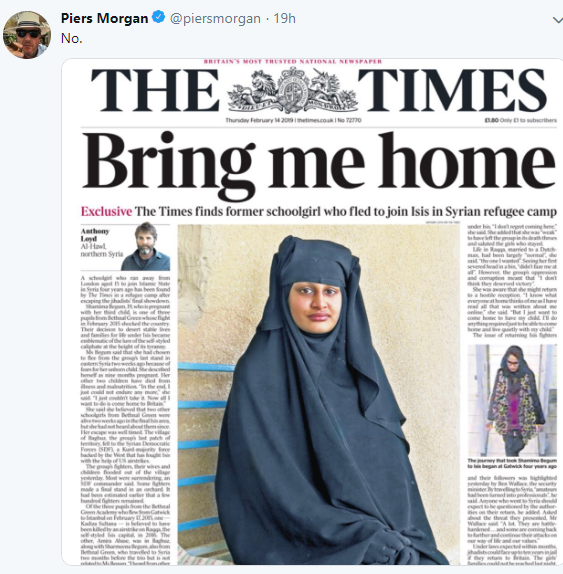 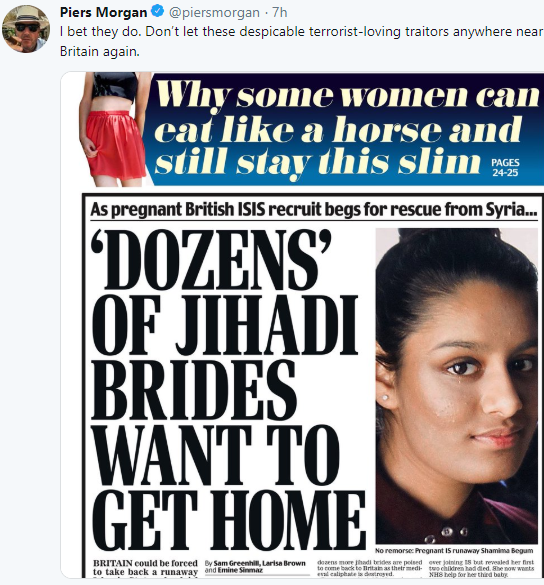