The tomb of legendary philosopher, Karl Marx in Highgate cemetery in London has been vandalised for the second time in the space of a month.

The words “doctrine of hate” and “architect of genocide” were found daubed in red paint across the Grade I-listed monument in the north London graveyard on Saturday.

The latest attack comes less than two weeks after the marble plaque on the tomb was defaced by an apparent attempt to scrape and chip Marx’s name off the marble slab with a hammer.

At the time the group who manage the cemetery said they feared the memorial would never be the same again. Maxwell Blowfield, 31, who visited the cemetery this morning with his mother admitted he was “quite shocked” by the attack. 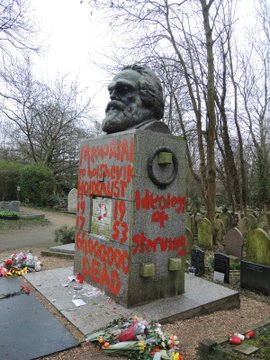 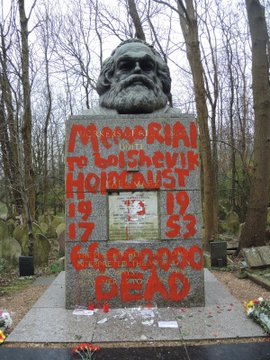 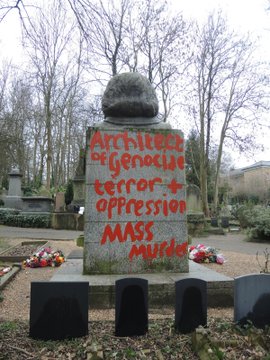 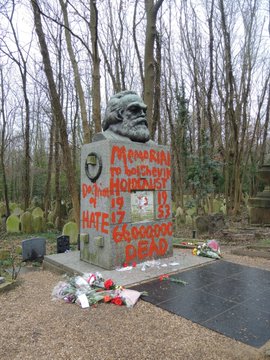 Vandals back at Marx Memorial, Highgate Cemetery. Red paint this time, plus the marble tablet smashed up. Senseless. Stupid. Ignorant. Whatever you think about Marx’s legacy, this is not the way to make the point.

Blowfield who works for British Museum, said: “It’s a highlight of the cemetery. The red paint will disappear, I assume, but to see that kind of level of damage and to see it happen twice, it’s not good. I wouldn’t like to say who or why someone did it but it was clearly someone very critical of Marx and that part of history. I am just surprised that somebody in 2019 feels they need to and do something like that.”

German revolutionary philosopher Marx moved to London in 1849 and lived in the city for the rest of his life. His theories became the basis for communism before he died on March 14, 1883, aged 64.  The granite slab monument in north London, 12 feet (3.7 metres) tall and topped with a bronze bust of Marx, was funded in 1956 by the Communist Party of Great Britain.