There’s been an outrage and people are protesting after a Catholic mother with 4 sons wrote a letter asking women to stop wearing leggings for the sake of their sons.

The mother, who was identified as Maryann White, penned the letter titled, “The legging problem,” which was published in The Observer, Notre Dame’s student newspaper (read here).

She told women to stop wearing leggings because leggings are “so naked, so form fitting, so exposing.” She asked them to think of “their sons”. 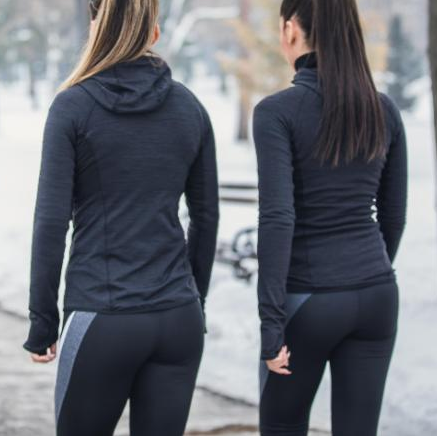 But a lot of people didn’t appreciate her letter. It had just the opposite effect on students at the Indiana campus.

Conrad Palor, a sophomore at the university, penned a response to White’s letter that was published in The Observer. He titled it, The legging problem: A response.

He wrote: “While White’s comments were likely intended to be innocuous, they contribute to and further the narrative that women need to dress in order to not distract their male peers, which only furthers the sexualization and subsequent subjugation of women’s bodies.”

A fellow Notre Dame mother, Heather Piccone, penned a letter to The Observer, pointing out that “if nakedness is wrong, then this woman’s sons better have been fully clothed at the beach at all times.”

“They better never have played a game of “shirts versus skins” pick-up basketball or football in the park,” she wrote.

To protest the letter, a Leggings Pride Day parade was organized by Irish 4 Reproductive Health, a campus nonprofit group. The group called on people to take part and post pictures of themselves wearing their favorite pair of leggings.

Many students posted pictures of their favorite leggings with the hashtag #LeggingsDayND.

“We wanted … to remind people that leggings are absolutely OK and you’re allowed to dress your body in whatever way you see fit,” Anne Jarrett, 21, a student at Notre Dame, who helped organize the demonstration.

Other women protested by taking to various social media platforms to share photos of themselves wearing leggings.

Anne-Marie tweeted with photos of herself in Nike leggings: “a Catholic mom published an opinion in ND’s newspaper that leggings Lead Men Into Sin so we’re protesting our right to not be responsible for men and to not be constantly policed by morals or femininity #LeggingsDayND” 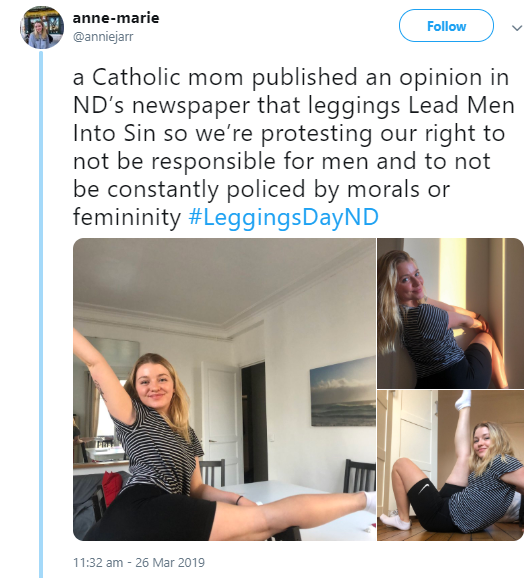 Men also took part in the protest by donning leggings.

A male Instagram user wrote: “let’s all try a bit harder to not shame people for what they choose to wear. Fashion is a multi-party activity. Sometimes it’s the observing party who needs a reality check. With love, from China.” 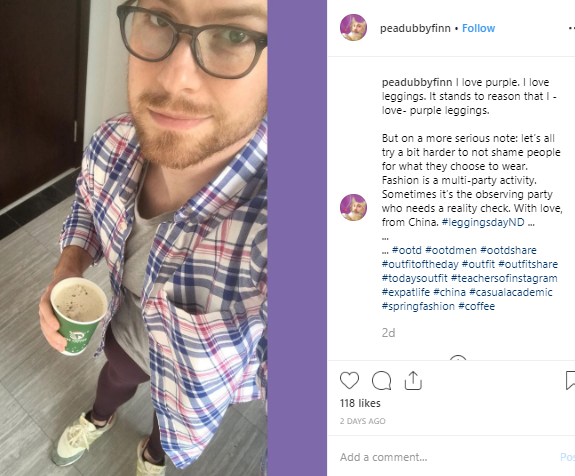 See some other reactions below. 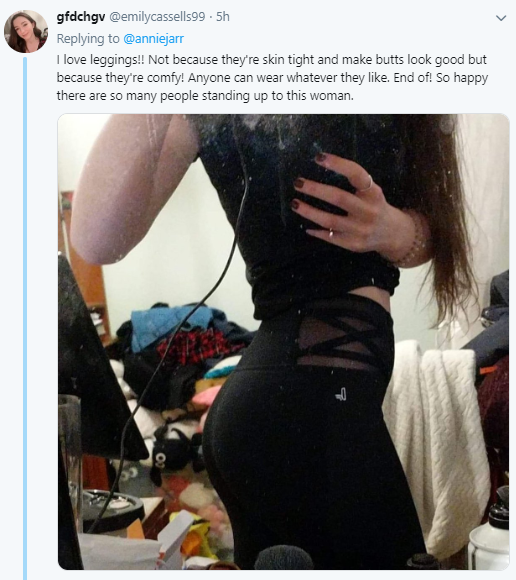 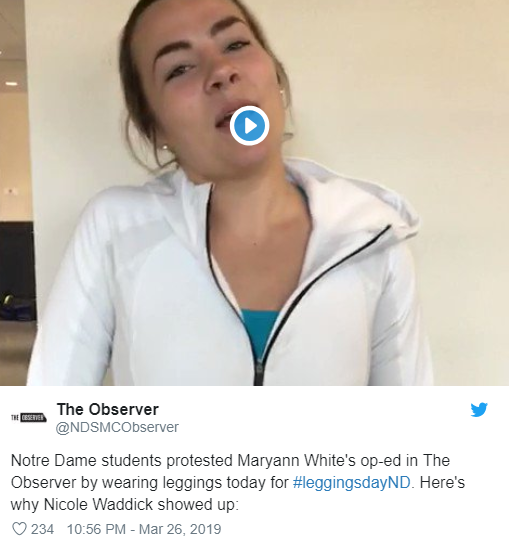 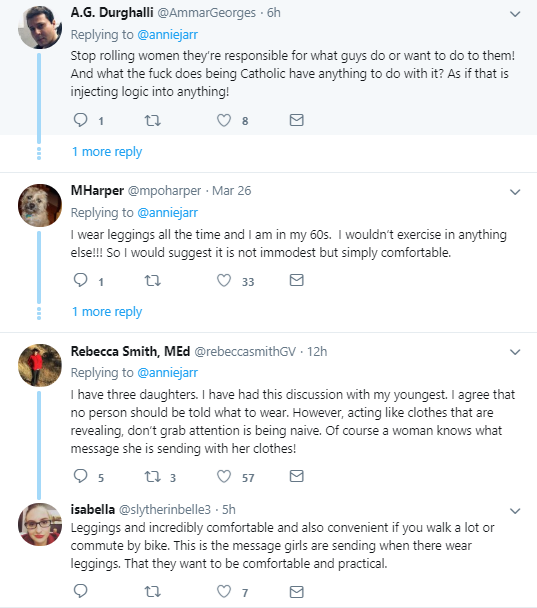 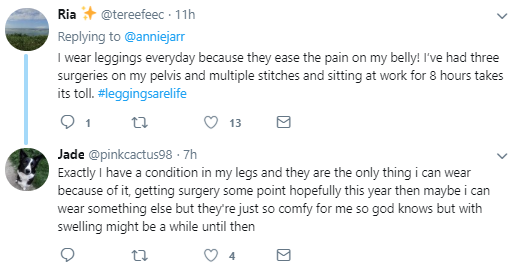 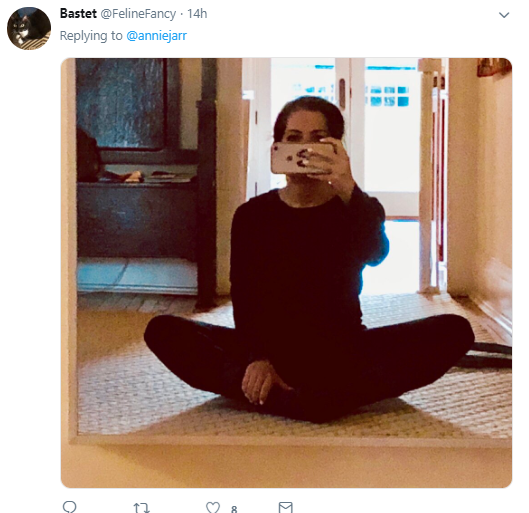 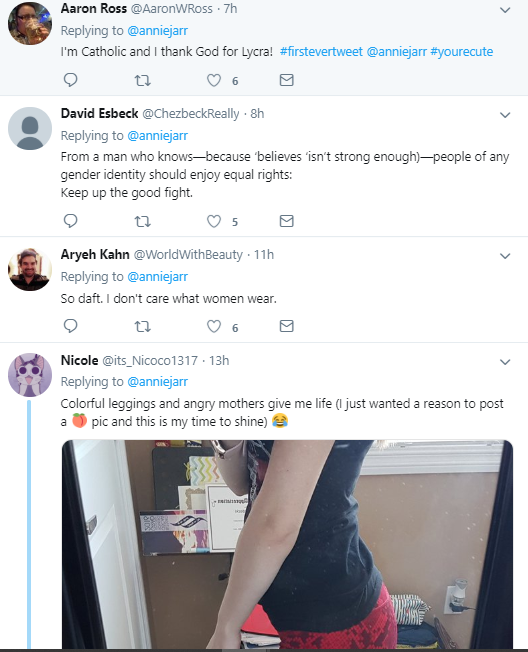