Nigerians on Twitter reacted to the news of 5 Nigerian men carrying out a robbery operation in Dubai by making it all about tribe. This led to a tribal war of sorts on Twitter and Femi Fani-Kayode was forced to step in and talk sense into the youths.

5 Nigerian men, all from the Igbo tribe, stole currencies worth over Dh2m during a seven-minute robbery at the Al Tauwain branch of the Al Ansari Exchange around midnight on March 20 (read here).

After the names of the suspects were published, Nigerians made it about tribe and began insulting the Igbos. In response, Igbo Twitter users shared screenshots of other crimes committed abroad by Yorubas and Hausas.

This led to a Twitter fight that was already turning dirty.

Stepping in to put an end to the tribal war, former Aviation Minister, FFK wrote:

I pity those rejoicing at the fact that the boys who were caught robbing a BureauDeChange in Dubai were Igbo.They fail to appreciate the fact that the rest of the world,including the Arabs,rightly view them as Nigerians and not Igbo and their behaviour is a reflection of us all. 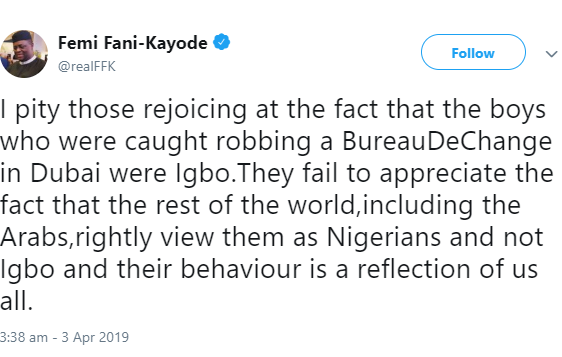