A man has made his father very proud by winning a court case his father has been embroiled in for over 2 decades.

Kinyera Jordan said he was only 6 when his father got into a land dispute and was sued. The case dragged on for years and the young son went on to study law. After graduation, he defended his father in court and won the case for him after 23 years.

Kinyera wrote: “In 1996, my dad got into a land dispute and was subsequently sued. I was 6 years old at the time. I went through 18 years of education, became an Advocate and took charge of the case. Today, Judgment In the final appeal was delivered in his favor.”

His sister replied: “I’m bawling. Oh Daddy. Oh how this grieved him. Over the years, it wore him down. We lost much. He’s struggled with Alzheimer’s. I hope today he’ll internalise this @kinyerajordan. I hope that he’ll smile. Justice can be delayed, but it will always be served. Thank you Lord.” 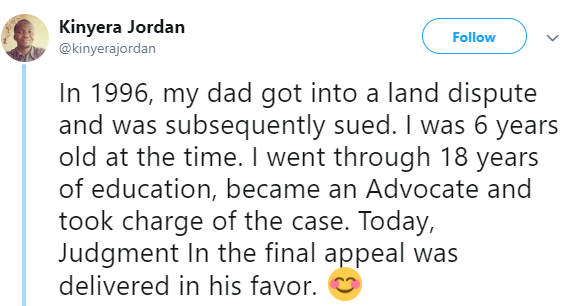