Days ago, a “teenager” was found wandering and he claimed he was Timmothy Pitzen, the boy who went missing in May 2011 at age 6. But the FBI have bow discovered that he is actually a 23-year-old man with a criminal history.

Police found him wandering the streets in Kentucky on Wednesday. He said he was 14, his name was Timmothy Pitzen, and he was kidnapped as a child. He claimed he managed to escape his kidnappers and run across a bridge into Kentucky. 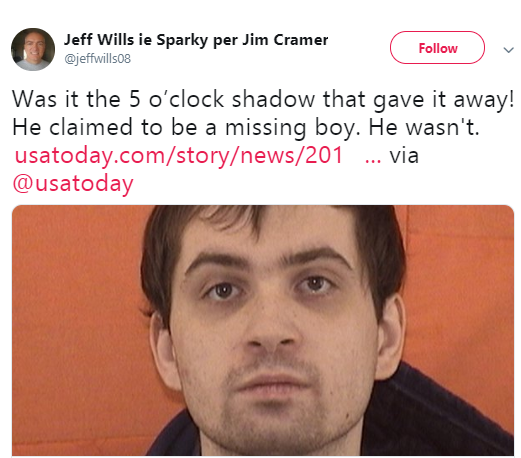 The real Timmothy Pitzen went missing in May 2011 at age 6. He was last seen alive with his mother, Amy Fry-Pitzen, who was found dead in a motel room in Rockford, Illinois on May 14, three days after she checked her son out of his kindergarten class.

A suicide note was pinned to her body. It read, “You will never find him.”

Police say the note was penned by Fry-Pitzen. The note said the boy was safe and with people who would care for him, but that he would never be found.

When the “teenager” was found and he caimed to be the missing child, Timmothy’s family, especially his grandmother, were hopeful and awaited the DNA resuts to prove he was Timmothy. He even gave Timmothy’s correct middle name. Sadly, the DNA results showed he wasn’t Timmothy and the family’s hopes has been dashed yet again.

“It’s been awful, said Timmothy’s grandmother Alana Anderson. “I feel so sorry for the young man who’s obviously had a terrible time and felt the need to say he was someone else.”

Police say Rini has a criminal record dating back to 2013. His charges include passing bad checks and ID theft. It isn’t clear why police didn’t run his fingerprints to identify him.

Police say they are considering filing charges against Rini.