A Nigerian man, Sanusi Iro Dabai, has allegedly been killed by kidnappers who abducted him and his friend in Jos, Plateau state last week Monday and still killed them despite millions of Naira his family members paid as ransom for his release.

Mohammed Isa, the Special Assistant on Media and Publicity to Senate President Ahmad Lawan, shared the sad story on his Facebook page.

Sanusi Iro Dabai was kidnapped alongside his friend around Marabar Jos area on Monday last week. Their decomposing bodies were recovered this evening in a bush after millions of naira ransom was paid to the kidnappers. Allah ya jikansu, ya gafarta masu. Su kuma Allah ya tona asirinsu 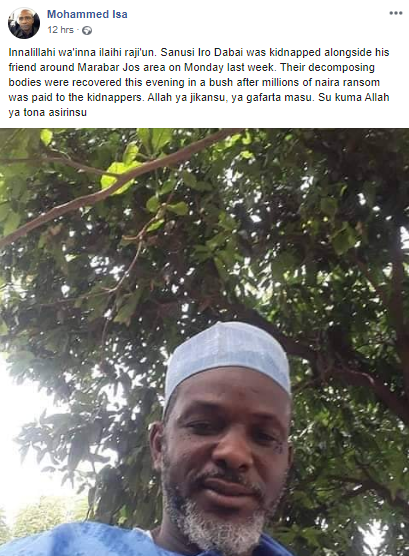