US president Donald Trump has come out to slam the whistle blower behind his impeachment probe, after lawyer Mark Zaid, representing the whistle blower, revealed on Sunday that his client who was still anonymous was ready and willing to answer Republicans’ written questions, ‘under oath & penalty of perjury’ – so as not to make the impeachment investigation against Donald Trump look like a partisan issue.

The Whistle blower, a CIA agent, alleged that Trump asked Ukraine president Zelensky to investigate his political rival, Joe Biden before he could release hundreds of billions of dollars in military aid to Ukraine.

The allegation sparked off an impeachment probe against Trump spearheaded by House Speaker Nancy Pelosi and backed by Democrats, but Republicans have slammed the process, stating that House Intel committee chairman, Adam Schiff already knew the whistle blower long before he came out while also blasting the impeachment probe for having closed door hearings without White House lawyers or Republicans present.
Moments after Mark Zaid offered for his client to answer written questions by Republicans as far as his identity isn’t revealed, Rep. Jim Jordan, the ranking member of the House Oversight Committee, rejected lawyer Zaid’s offer.

‘Written answers will not provide a sufficient opportunity to probe all the relevant facts and cross examine the so-called whistleblower,’ he said Sunday.

‘You don’t get to ignite an impeachment effort and never account for your actions and role in orchestrating it.’

Trump on Monday took to Twitter, to slam the whistle blower, saying the whistle-blower who launched the Ukraine-centered impeachment inquiry should be forced to testify in person, noting that answering questions in writing would not be good enough, even alleging that the second whistle blower as claimed by Said doesn’t exist and is all a plot of Schiff to politically damage him before the election.

See his Tweets below. 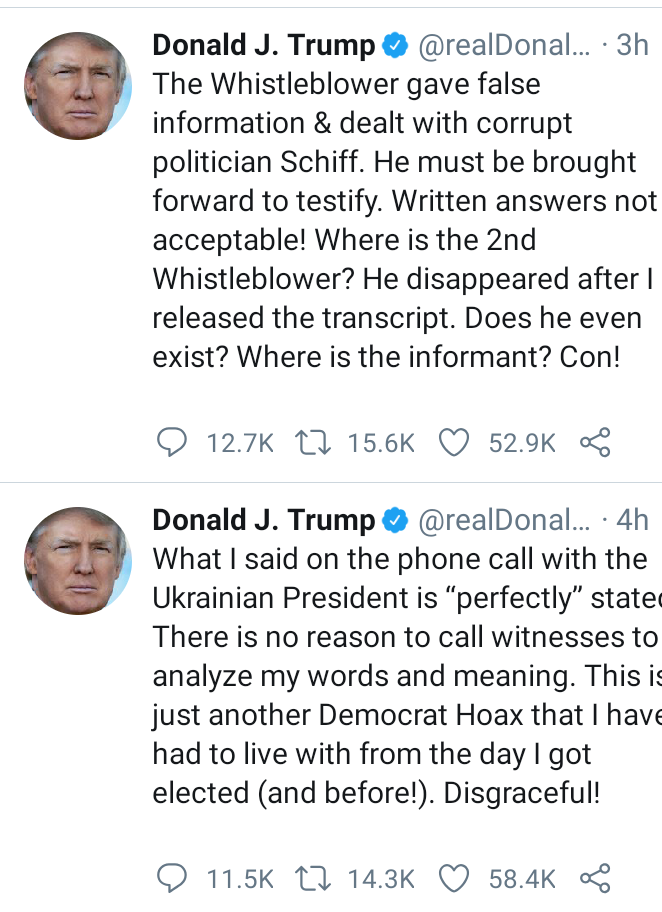