Seyi Oluyole, the founder of Dream Catchers, has given more details about the abuse she allegedly suffered from her estranged husband.

The philanthropist, who began a charity dance group for orphaned, street kids, had a TV interview with Channels after which she took to Twitter to recall her past relationship and the emotional abuse she was put through.

She wrote: “The biggest fallout of narcissistic abuse is the self doubt it leaves you with. You start to doubt yourself in every way possible. And this just happened to me after my interview on Channels News! My ex would normally complain about every word I uttered after an interview… 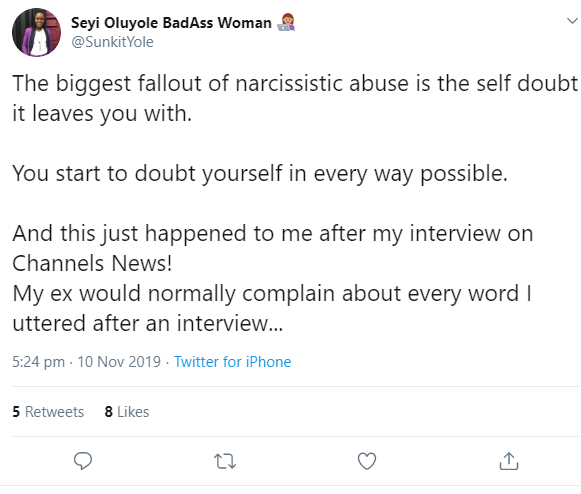 “At the beginning, it rubbed off wrong on me so I’d complain but then he’d get angry and say I didn’t appreciate him. ‘You always think I mean evil. I love you and I want you to be great. I want us to build an empire.’ He would say. So I’d relax and tell myself I was overreacting.”

She added: “Gradually, I became very unsure of myself and words. Before I say or do anything, I’d ask him. Just so I don’t get corrected after. Even with that, he’d still complain o.” 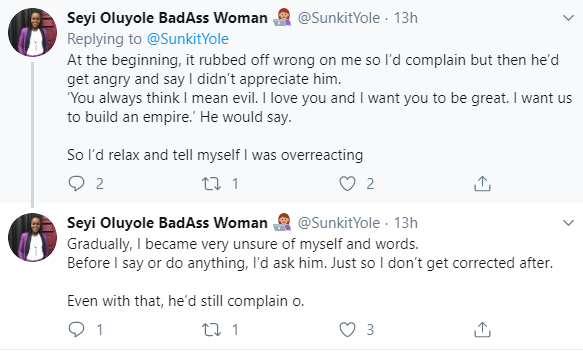 Barely two weeks ago, Seyi shocked her followers when she alleged that her husband nearly killed her earlier this year and she had to be helped by people to escape from home (read).