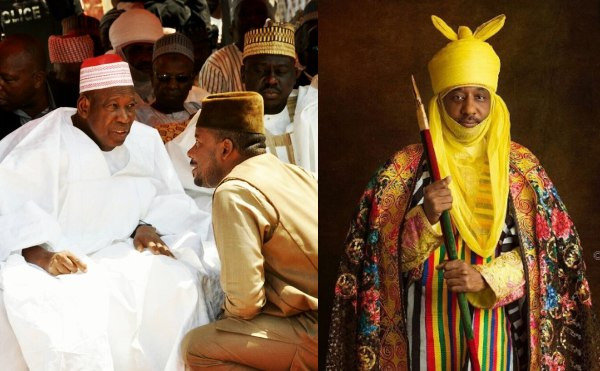 Governor Abdullahi Ganduje’s aide Salihu Tanko Yakasai a.k.a Dawisu has taken a swipe at Emir of Kano, Muhammad Sanusi II over his comment which advocated for jail term for parents of the abducted kano children who were found in Anambra State after 5 years.

Sanusi said “On the issue of abducted Kano children, I have been speaking with Obi of Onitsha on the issue. We are keeping track on the issue.

“We heard all manner of outrage against the Igbos that our children were stolen. Did the Igbo kidnappers enter into your house to abduct the child? Or, did you allow your child to roam in the street aimlessly?

“We must tell ourselves the truth. When the first parents reported the case of their missing children to me, I said, had I got the powers I have sent the parents to jail.

“I even directed that the commissioner of police should be asked if we have any law called criminal negligence. Don’t we have such a law? Whoever comes to report abduction of his 4-year-old child while playing deserves to be jailed. Criminal negligence!

“Hausa man must change his thinking. We will always apportion blame on Igbos, Yoruba, when it is actually our fault.

“Now, make attempt to abduct a child in Onitsha and see if you will find one available. Is this not true? Do they leave their 3 to 4-year-old children roaming in the street begging?

“If you can’t feed your family, don’t send your child to beg on your behalf. If we continue to live in self-denial, we will live to cry, shifting blame.

“I am not saying others are not guilty, I know tomorrow people will start saying I am blaming parents for abduction of their children. I know my statement is always misconstrued. I did not say they are not guilty, but Hausa man himself observed in a proverb that ‘if the fly is stubborn, the candy is sweet.”

However reacting to the comment credited to Emir Sanusi via a tweet he shared, Governor Ganduje’s aide said the abducted kids are not almajiri kids. He described Emir Sanusi’s comment as “reckless.”

Yakassai wrote “A very reckless comment to make. I wonder if any of his relatives get kidnapped or stolen, he will act the same way.

“The kids are not almajiris for goodness sake. SLS (Sanusi Lamido Sanusi) should have kept quiet instead of opening his filthy mouth to make such insensitive remarks. Nonsense!” 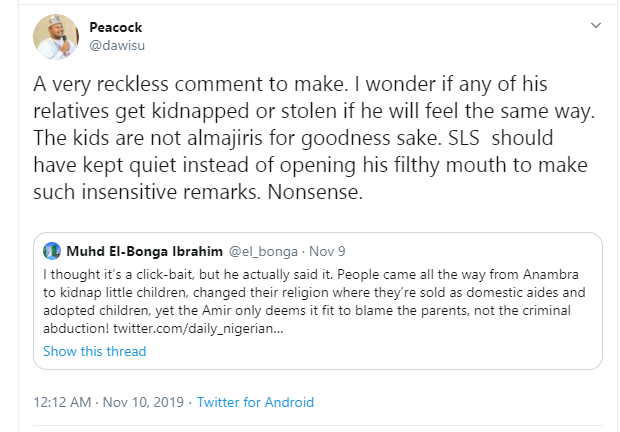