The Nigeria Football Federation President, Amaju Pinnick, has revealed that he his willing to keep working for the benefit of Nigerian football and is glad the corruption allegations levelled against him and his NFF led board is over.
The Independent Corrupt Practices and Other Related Offences Commission (ICPC)  seized mansions belonging to the  Amaju Pinnick and NFF second vice-president, Shehu Dikko, in September and also disclosed that Pinnick’s residence in Ikoyi, Lagos State and Dikko’s residence in Maitama, Abuja had been sealed.
Among the charges were misappropriation of the sums of $8.4million and N4billion, conflict of interest and non-declaration of assets.But last week Tuesday, Justice Ijeoma Ojukwu dismissed the entire case with all 16 charges, and acquitted the NFF chieftains in consideration of the submission of the defence and the prosecution and in line with the rules of administration of criminal justice.
Appearing on Channels Television this morning, the Glass House supremo spoke on the recent court victory, where he and the NFF board members were discharged of allegedly stealing $8.4million (N4billion).
Pinnick, whose comments were serialized by the NFF on it’s official Twitter handle, said to Channels TV this morning: ”This is not a personal victory for me and my other board members. It is victory for all of Nigerian football.”
”We have always maintained our innocence at the NFF and laid our books bare for everyone to see. ”We have always published our accounts using some of the best auditing firms in the world.”
” I am happy those toxic moments are over and now it is time to pull and work together, not pull apart.” 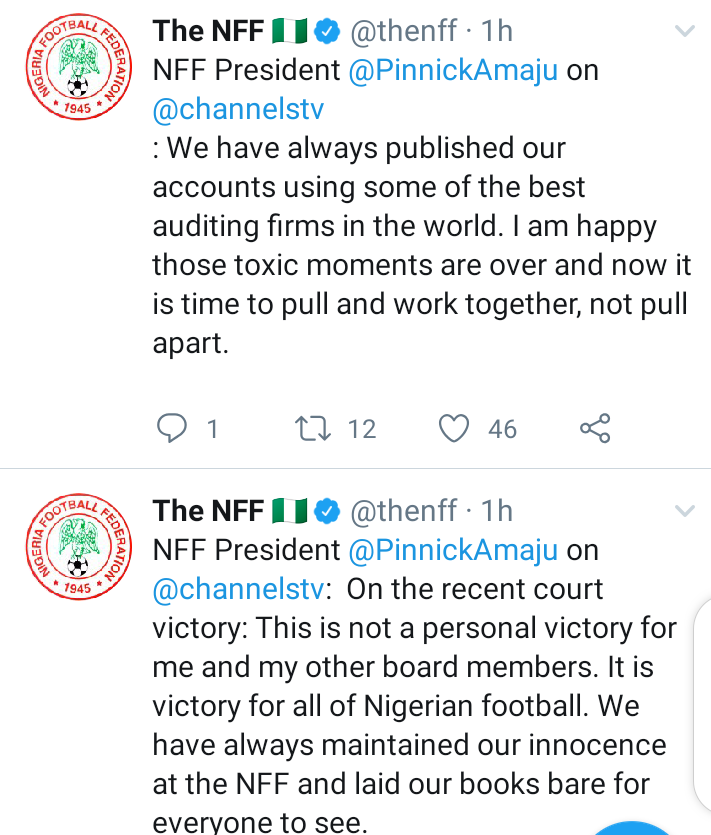