Maina was ordered by Justice Okon Abang to produce two sureties who must be serving senators.

According to his ruling, Justice Abang ruled that 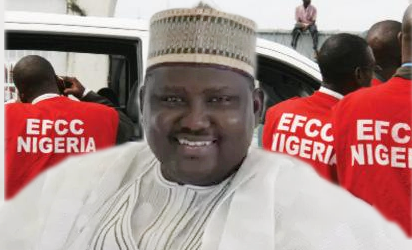 the two senators must not be standing any criminal trial in any court in the country, must be prepared for a N500 million bond each and must always be in court with the defendant at each adjourned date.

Justice Abang had, on Nov. 21, fixed Monday for hearing on the bail application and for the continuation of Maina’s trial.

It was reported that Maina was alleged to have abused his position as PRTT chairman to award fictitious contracts for purported biometric enrolment of pensioners, an offence punishable under section 317 of the Penal Code Act, Cap532, Vol. 4, Laws of the Federal Capital Territory of Nigeria 2007.

Wilson Uwujaren, spokesperson for the EFCC, had said Maina and his cohorts also allegedly made claims for fictitious allowances during the course of the purported biometric enrolment assignment.

He stated that the proceeds of the fictitious contracts were allegedly remitted into his account through the second defendant.